The Digital Down Low: The media hate PewDiePie 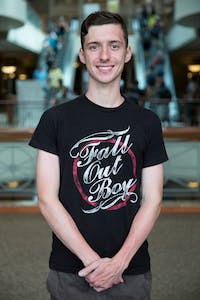 The media have generally never cared about YouTubers, streamers or independent online personalities of other sorts. The most they will these people usually is how much they make and how shocking it is that they make this much — I can’t say that I haven’t written on the topic.

It makes sense — the demographic of YouTubers and online entertainers is generally very different from the demographic of, say, The Wall Street Journal. I do bring up the Journal here specifically, however, to make a point.

Felix Kjellberg, known by many as PewDiePie, holds the YouTube channel with the most subscribers of all time, boasting more than 50 million. However, in light of recent events, he has been criticized relentlessly by the media.

The recent events referred to are, of course, his jokes from his Fiverr video. The jokes were seen by many as anti-Semitic, and PewDiePie has told his viewers that he did not mean them seriously and that he is sorry for them. He outlines this very clearly, along with his criticism of the media’s perception of him.

One thing he hammers in is how obscenely the Journal misrepresented him — and it truly is shocking.

PewDiePie has created response videos to the controversy making fun of himself and the situation, which has included exaggerating himself as an anti-Semite, along with explaining how easy it would be to take such clips out of context and use them to portray him as an actual anti-Semite.

Of course, the Journal takes even these clips out of context to portray him as an anti-Semite.

It doesn’t seem fair — in fact, it seems a bit ridiculous.

Criticize someone for offensive jokes. Call someone out if they’re being distasteful. Break your business ties with someone if they act in a way that does not align with your views. All of these things have happened to PewDiePie, and he has accepted them fully.

However, demonizing someone by misrepresenting them and creating fictional storylines is not only wrong; it’s destructive.

Markiplier, a YouTuber famous for his charity , positive attitude and dramatic playthroughs of horror video games, made an articulate video concerning this issue. At some point, the line between finding fault in someone’s actions and belittling them into something they are not based upon a skewed perception of them is crossed. Markiplier discusses the issue in depth, reminding his viewers to, no matter what, remember to treat people with respect, even in disagreement. The media have not only destroyed that boundary; they are dancing on its grave.

In many ways, the media have lost ethics in the way they represent people (if it ever had these ethics in the first place). Flashy headlines that make someone into a villain — those are the articles that get clicks. Fabricating a dark storyline about a person who made a mistake — that makes money. Respect has nothing to do with it, according to the Journal and other outlets.

The media are largely all we have when it comes to discovering new things about the world. It controls the perception of many people who only read articles without further investigating the context of the issues, whether due to a lack of time or a lack of care. If the media continue along this road of hating and demonizing people with falsely fabricated stories, however, people may start to catch up.

That seems to be what happened here — many people caught up, and many people discovered exactly what was going on. The obvious bias of the Journal against PewDiePie has frustrated many, and perhaps this will only become more obvious as the media continue to fabricate entire stories from relatively small situations. Perhaps, finally, the consumers will stop trusting the press altogether. Perhaps, finally, the press will have to change.

Marco Omta is a sophomore studying music production. Please note that the views and opinions of the columnists do not reflect those of The Post. What do you think about the relationship of YouTubers and the press? Email Marco at mo183714@ohio.edu.