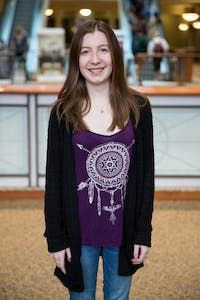 Last Wednesday, Created Equal, an anti-abortion group based out of Columbus, visited campus. They brought graphic and unrealistic images they claim to represent the reality of abortion.

Why do organizations like Created Equal feel the need to use these images in the first place? It is possible that they use the shock factor and theatrics of the pictures to distract from their lack of other persuasive arguments. But even more obvious is the fact that the images blatantly misrepresent abortion in a way that benefits them.

As of 2011, over 75 percent of abortions in the United States were performed prior to the 10-week mark – well within the first trimester. At this point in a pregnancy, the fetus is only about an inch long and doesn't resemble much of anything.

Sure, the limbs and head are identifiable and there may be the beginnings of fingers and toes but overall the fetus does not yet look like a baby. And this is the latest point in gestation that the vast majority of abortions are performed. Most abortions occur when the baby is even less developed, having no fingers and toes, and arms and legs that look similar to paddles. How can Created Equal claim their images represent common, everyday abortion” using images of fully formed fingers, toes, arms and legs?  These images would only truly represent 20 percent of abortions that occur after 10 weeks.

While the group does have a signed document on their website from a doctor who has performed abortions verifying the authenticity of the images, I think it is worth noting that the doctor is also affiliated with pro-life and anti-abortion organizations. So, it's worth noting his opinion is not an unbiased one. He may think that it would be beneficial to exaggerate how realistic Created Equal’s images are or how representative they are of a typical abortion.

To be clear, I am not claiming that any images used by Created Equal are falsified in any way or that any doctors have lied about the accuracy of the images, nor do I discredit their constitutional right to protest. But it seems to me that the photos may be used to strategically misrepresent the reality of abortion in the U.S.

Hill is a sophomore studying sociology-criminology and women's, gender and sexuality studies at Ohio University. Please note that the views and opinions of the columnists do not reflect those of The Post. How do you feel about Created Equal? Let Karinne know by tweeting her @karinnehill.