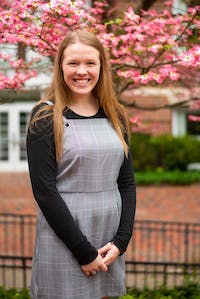 As journalists, we’re constantly, sometimes painfully, aware of the grammatical rules we’re meant to follow. Rules such as what to capitalize, when to include adjectives or matching pronouns to subjects are all weighing on our minds as we write stories daily.

However, it’s the latter point that gets me — matching pronouns to subjects.

In journalism, we’re taught that if we have a singular subject, such as “a student,” for example, we need to use the singular pronouns “he” or “she.” Example: “If a student wants to join The Post, he or she will need to reach out to our editors.”

As a journalist, this makes sense. It’s what we’ve always been told, it’s what various style books have preached and it’s been common practice for longer than I’ve been alive.

As a person, this doesn’t make sense. Journalists’ use of the singular “he or she” pronoun plays right into binary language that people are desperately trying to avoid.

When talking about binary language, this is referring to the idea that gender has been constructed around the binary of men and women, i.e., men and women are the only two genders that exist. However, that’s simply not the case. There are nonbinary people who don’t subscribe to restrictive gender norms and people who simply don’t want to be limited to binary pronouns of she/her/hers and he/him/his.

That said, let’s look back at the example sentence. In order to be grammatically correct, we’d write: “If a student wants to join The Post, he or she will need to reach out to our editors.” The subject is singular (a student), so the pronoun would need to be singular as well, and because we don’t know the pronouns of the particular student, we say “he or she.”

However, if I’m writing that sentence, I’d write it this way: “If a student wants to join The Post, they will need to reach out to our editors.” The subject is still singular (a student), but the pronoun is technically plural (they).

I have been criticized for this style on more than one occasion from readers, professors and more. As a journalist, I completely understand their concerns — this isn’t the proper style of writing as journalists, and we need to be as grammatically accurate as possible. But as a human being who is thoroughly concerned with making sure everyone feels included, seen and respected, I can’t in good conscience write pronouns in a gender binary manner.

I can’t preach inclusivity and acceptance of all people while still using language that subscribes to the binary; it goes against what I believe. Though we are taught as journalists to keep our opinions to ourselves to avoid bias in articles or to a reader, this is one issue that consistently bothers me, and I think it’s important to talk about.

Even the AP Stylebook is starting to get more lenient with this, saying “In most cases, a plural pronoun should agree in number with the antecedent: The children love the books their uncle gave them. They/them/their is acceptable in limited cases as a singular and-or gender-neutral pronoun, when alternative wording is overly awkward or clumsy. However, rewording usually is possible and always is preferable. Clarity is a top priority; gender-neutral use of a singular they is unfamiliar to many readers.”

Though I can’t ask every publication or even this publication to change the style of specifying when someone uses they/them/theirs pronouns, I can make the decision to use inclusive pronouns when referring to a singular subject. It’s a small ask, but it’s one that can go a long way in making people feel included while reading an article.

I know I will continue to receive criticism for this from grammar buffs and journalists who have been doing this work for much longer than I have. Frankly, I don’t care. I know what I’m writing isn’t grammatically correct, but I do know that it makes my friends who use they/them/theirs pronouns and people I don’t know who use they/them/theirs pronouns not feel so out of place or excluded when reading my work.

The final rundown: if you’re reading my articles, are passionate about grammar and see that I’m using plural pronouns with a singular subject, I apologize for improper grammar. However, I would take someone criticizing my grammar over criticizing my sense of inclusivity and acceptance any day. We shouldn’t value grammar over human beings.

Riley Runnells is a senior studying journalism at Ohio University. Please note that the views and opinions of the columnists do not reflect those of The Post. Do you agree? Let Riley know by emailing her at rr855317@ohio.edu.