Ghost Recon Wildlands is the first game of 2017 to leave me in utter disbelief.

But that’s not a good thing. I’m in disbelief because of how abysmal the game is. I’m in disbelief because I cannot understand how Ubisoft, a company with great open-world games like The Division and Watch Dogs, can offer up an open world game as awful as Wildlands, which uses none of the features that make the company’s other games fun. While I had high hopes for Wildlands, I can say with certainty that it’s the worst game I’ve played so far this year.

Wildlands, a copy of which The Post received from publisher Ubisoft at no cost and will be donated to Operation Supply Drop, carries a solid premise. The player is a special operative tasked with taking down the most powerful drug cartel in Bolivia. The country is being devastated by Santa Blanca and its cunning leader, El Sueño. It’s up to the player to take out his henchmen (buchones) one by one and destabilize the cartel from the inside. The opportunity was there for Ubisoft to create an intricate tale full of interesting personalities for each buchon and stealthy covert operations for the player to take part in.

Instead, the story present is paper thin, confusing, poorly written, poorly told and rather useless. The buchones aren’t interesting. There is no character development to be found. Even El Sueño, the game’s main antagonist, is one of the most underdeveloped main characters I’ve ever seen in a game.

The game makes no effort to make any piece of information seem important. The scripting is boring at best and cringe-worthy at worst. The voice acting ranges from mediocre to emotionless. The story’s presentation is so lazy that at the game’s final scene, when I should have been on the edge of my seat, I sat back and laughed at my screen.

The gameplay isn’t any better. Most missions average a couple minutes apiece and have little to no substance. The player might be tasked with walking into a compound, hacking a computer and leaving. Or the player might have to find and eliminate a target. These missions can literally take a few seconds to complete. Even gunplay missions are not very well designed and are still far outnumbered by the other, shorter missions.

The general problem with the missions is that they’re usually far too easy to cheat. For example, when playing with the usually hapless AI, the player can walk into an area, intentionally die, then wait for the AI to go suddenly become ruthless killers, take out all nearby enemies and revive the player to continue the mission. In missions where the objective is simply to eliminate a specific target, the AI might even manage to complete the mission for the player while he or she is down.

Other times, the missions are absolutely frustrating. Stealth missions can be near impossible because enemy AI seem to have the vision of hawks, and there are no good stealth mechanics like a snap-to-cover system (that made The Division satisfying). Missions that involve capturing a hostage sometimes end in the hostage trying to run away and being killed in the process. Any mission with a vehicle is a gamble because of how poorly they handle. And if a player does fail a mission, the game’s horrid respawn system usually drops the player a solid 400 meters away from the objective with no mode of transportation. Missions with multiple objectives don’t come with checkpoints, so even if only the second half of the mission is troublesome, one can prepare to do the whole process over again.

Overall, I soon found that most missions required so little actual skill that I stopped applying points in the skill tree about halfway through the game. Once I unlocked some of the essentials, I rolled with the punches through the latter half of the game. Upgrading my character simply wasn’t worth the time it took to go to the menu since few of the upgrades actually seemed to make any difference in the game.

Vehicle physics and mechanics in Wildlands are laughable. Nearly any vehicle can scale the steepest of cliffs, yet trying to round corners is like driving a car without power steering. Motorcycles can sometimes survive nasty several-story falls but can fling the rider off after hitting the smallest bumps. The player’s helicopter can be shot by a SAM missile, crash to the ground, explode into a ball of fire, and yet the player will emerge completely unscathed. In short, nothing makes sense.

The game’s map is absolutely massive for no good reason. There’s nothing of value to do in it. In just about any other open world game, there’s something worthwhile or at least distracting to do while going from Point A to Point B, but that’s not the case in Wildlands. There are side missions scattered about, but since the skill tree is meaningless, there’s no real incentive to take on side missions. Main missions might be spread out over several kilometers, and there’s essentially nothing but a long, boring, difficult drive or flight between the player and the next objective. 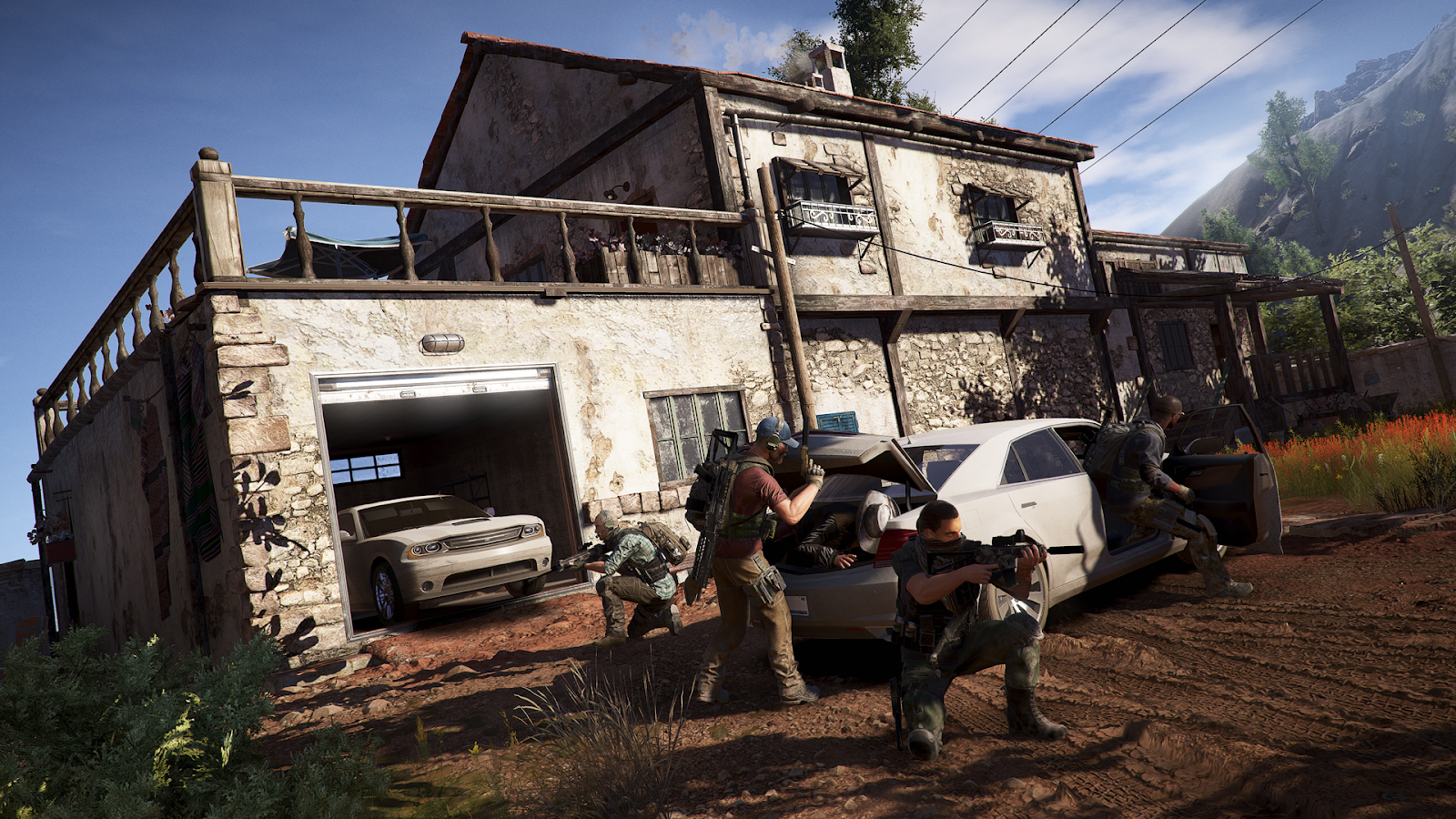 I say difficult because combined with the fact that the vehicles themselves are poor and the map is large, the map is also poorly designed. Don’t misunderstand me: Ubisoft’s take on Bolivia is gorgeous, which may be the game’s only redeeming quality. There are beautiful jungles, canyons, villages and more. But those are coupled with the twistiest, windiest dirt roads one could imagine. While Bolivia may very well have awful roads in reality, the factual accuracy doesn’t lend itself to good map design in the game. And a good, fun design is what’s more important than accuracy in this case. Sometimes it’s a struggle just to stay on the road, and good luck trying to go off road: Most of the map is extremely hilly and peppered with boulders.

Not only is the game tedious and not fun, it has more bugs and glitches than I think I’ve ever seen in an Ubisoft game. I’ve watched cars emerge from the ground and spin around wildly before either settling down or flinging themselves into the sky. I once had a friendly contact I was tasked with approaching for a conversation assume a t-pose, run/hover frantically to his car, and drive away with his t-posed head and arms sticking through the roof of his car, resulting in a mission failure. Unfortunately, the bugs described are only a fraction of the ones I experienced. I can’t think of a single play session where I didn’t encounter at least one issue, laughable or game breaking.

At its core, at least Ghost Recon Wildlands functions for the most part. It’s not unplayable, but playing it just isn’t fun. Outside of a couple missions that showed glimmers of hope and a map that’s actually very pretty, I cannot come up with any redeeming qualities present in the game. It quickly becomes a slog that must simply be fought through to the end, if one even has the patience to make it that far. Missions are tedious, repetitive and boring. The story is barely there and isn’t worth paying attention to, driving vehicles is difficult, the map design is awful, and so much more. The game, quite simply, feels dated. Games several years old function better than Wildlands, and despite the fact that Ubisoft has other recent games with great gameplay systems, Wildlands utilizes none of them. Even if Wildlands had unimaginatively cut and pasted from other Ubisoft games, it would’ve been better than the lazily designed, lifeless husk of a game that it turned out to be.

Ghost Recon Wildlands was released March 7, 2017 for PS4, Xbox One and PC.