Words I Might Have Ate: Why do we hate sell-outs? 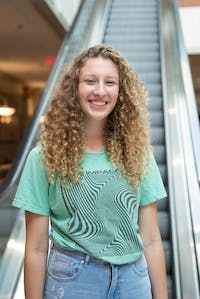 In March, my dad and I travelled all the way to Pittsburgh to see Green Day. Both my father and I had waited years to see them, and the show ended up being fantastic. It was one of two arena shows I have been to, and it was extremely exciting to be in the presence of a band who I grew up listening to.

At one point in the show, Billie Joe Armstrong, the band’s lead singer, asked if there was anyone in the crowd who had been to Green Day’s first show in Pennsylvania in a basement in the early 90s. A couple of guys with overpriced floor seats raised their hands and Armstrong acknowledged them. At some point in time, these two men had seen Green Day in a basement, but still chose to spend an absurd amount of money to be close to Billie Joe Armstrong again. At what point does a band leap out of the bounds of punk?

Green Day used to have basement shows, but now they sell $30 T-shirts and force fans to pay extra just to have floor seats. Where did the poor punker go? Why did they become sell-outs? Of course, being a sell-out is not limited to punk. However, the inherent irony of a punk band indulging themselves in money-driven intentions makes punk rock the most obvious target of “sell-out” culture. And Green Day is not the only punk band to do so, either. I would say the same about The Offspring, The Ramones (think of the H&M Ramones shirt every edgy girl in the world has) or even the late David Bowie.

Punk bands have always been praised for the “starving artist” narrative. Pretentious punk fans go out of their way to criticize those who conform to the music industry’s demands.

Sell-outs tend to be criticized most by those who relate to them the most. Punk rock kids who play s----y punk music and make no money doing so like to see bands on small labels like their own — only until the band they admire succeeds. After that, they can no longer relate to them through the sense of fighting the monster of the music industry. When good music is involved and it can be spread to the masses, why do we look down on the fact that other people enjoy the music as well? I love being able to relate to others in liking the same music, most people do.

The “starving artist” narrative in any medium is exhausted. If an artist can make money doing what they love, power to them. Succumbing to “the man” does not make a band or artist weak in terms of their morals. Every human, even a punk human, needs a place to live, food to eat and clothes to wear.

So if you hate Green Day or any other formerly starving underground band because they “sold out,” don’t. Being alive requires a way to get by, Billie Joe Armstrong and others just found theirs in music.

Shelby Campbell is a freshman studying journalism and political science at Ohio University. Please note that the views and opinions of the columnists do not reflect those of The Post. What do you make of sell-outs in the music industry? Let Shelby know by tweeting her @bloodbuzzohioan.