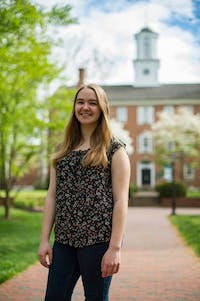 This past week has been full of excitement and anticipation for Posties.

For weeks, the sports staff members, photographers and designers have been preparing for our special basketball edition. Also, our Digital Production Editor Taylor Johnston put in extra time to code a landing page for all of the stories, including the ones that couldn’t fit into print.

The tab has also been rearranged slightly so all the basketball content is paired together. The puzzles, news briefs and blotter are located near the end of the edition rather than on pages 6 and 7.

But, that has not been the only commotion taking place our newsroom this week.

On Feb. 8, Managing Editor Kaitlin Coward and Assistant News Editor Lauren Fisher spent the day in Columbus at the Ohio News Media Association convention. For the past few years, The Post has earned a few awards at the convention. The staff entered several stories and a few editions from last academic year — the year we transitioned from having a daily print product to a weekly tabloid.

The Post earned awards in nine out of the 10 collegiate categories and received the Frank E. Deaner Award for Excellence in Collegiate Journalism, Division A. The Frank E. Deaner award is granted to the top newspaper in each division.

As a staff, we are incredibly excited and proud of one another. We will continue to put in the hard work to produce great content for all of our readers online and in print. We hope the basketball edition is exactly that.

We’re also adding to the fun with this edition. Post staffers can be found at the men’s basketball game Saturday at a table in The Convo. Stop by for the chance to win a free T-shirt by signing up for our daily email newsletter, Post Haste, and liking and following The Post on Facebook and Twitter. We’ll have several editions from this year on the table, possibly along with a sweet treat.

It’s a great chance for us to interact with our readers and to learn more about why people pick up The Post.

Elizabeth Backo is a senior studying journalism and the editor-in-chief of The Post. Do you have any feedback for The Post? Tell her at eb823313@ohio.edu or send her a tweet at @liz_backo.