CLEVELAND — Ohio seemed almost invincible during the first three months of its season.

The Bobcats were lofted as one of the teams to beat in the Mid-American Conference weeks before their conference schedule even began. They were the defending conference champions and had the merits to prove so. They’d gone toe to toe with nonconference opponents both equal to and well above their average MAC opponent, and they entered conference play on a warpath. A nine-game win streak midway through the season showcased the Bobcats at their best.

Optimism still remained even when cracks began to show. The Bobcats trudged through an exhaustive February schedule and came out the other side fatigued. They lost four of their last five games of the regular season. Certain victories became exasperating losses. Still, Ohio retained hope that it could muster enough energy to repeat its postseason run from a season prior and earn its second MAC title under coach Jeff Boals.

But that hope will remain just that — hope.

Ohio’s lofty dreams are lying cold on the floor of Rocket Mortgage FieldHouse. Ohio, one year removed from its latest MAC title, is leaving Cleveland empty-handed. Kent State delivered a 67-61 backhand Friday night to knock Ohio out of the MAC Tournament semifinals and send it on the first bus back to Athens.

“We put ourselves in a position where we were a game up in first place, and I thought some things caught up to us.” Ohio coach Jeff Boals said. “That schedule, I thought, caught up to us. We weren’t done any favors there."

The MAC Tournament can be considered a new season with different stakes. Boals exuded that philosophy after the Bobcats defeated Ball State in the quarterfinals Thursday. If the Bobcats wanted to reach the MAC Tournament finals again, they’d need to beat a team that had won its previous 13 games.

But when push came to shove, Ohio didn’t have the mettle to match Kent State.

The Golden Flashes had been a plague all season. The two teams traded losses in the regular season, and Ohio's loss inside the MAC Center in mid-February served as a low point that came far too late in the year. Ohio's problems, while patched up from the loss three weeks prior, still leaked into Friday. The Bobcats chafed against the Flashes' defense, and a dry spell on 3-pointers midway through the first half only widened an ever-growing gap.

Ohio's inability to respond on the boards didn't help. Rebounding had been a thorn in Ohio's side for much of its conference schedule. Kent State never suffered the same issues. It beat Ohio on the glass and robbed it of offensive rebounds that might've sparked a rally before halftime.

Even at their best, the Bobcats still lagged behind. A rally in the second half brought hope. A 19-6 run summoned by Mark Sears and Ben Vander Plas brought Ohio within a breath of tying Kent State as the clock ticked down. What once was a 15-point deficit had been shaved down to a two-point difference.

But their best wasn't enough.

The Bobcats were gassed. They sank just two 3-pointers in the final three minutes of the game, and they settled on free throws to tack on the final two points of the night. Sears made one last attempt beyond the arc just before the final buzzer sounded, only to have his shot swatted out of the air by Malique Jacobs.

"Proud of our guys fighting back into down two with a couple months to go," Boals said. "We just needed to get the one or two stops that we needed. Our guys gave everything they had. They battled."

Half a season ago, it might've seemed impossible for Ohio to be knocked out in the semifinals. It tore through the first portion of its MAC schedule and climbed to the top of the conference standings. Ohio wasn't perfect, but it was on a run through the regular season that no other team in program history had made before.

But Kent State was on a monumental winning streak and had shot up the rankings before the postseason began. Ohio's hot streak had fizzled out weeks prior.

Now? Ohio's been sent packing, and its hopes for a repeat run at a conference title was the first box shipped out of Rocket Mortgage FieldHouse.

The Bobcats were almost invincible this year. But almost doesn't cut it in the MAC Tournament. 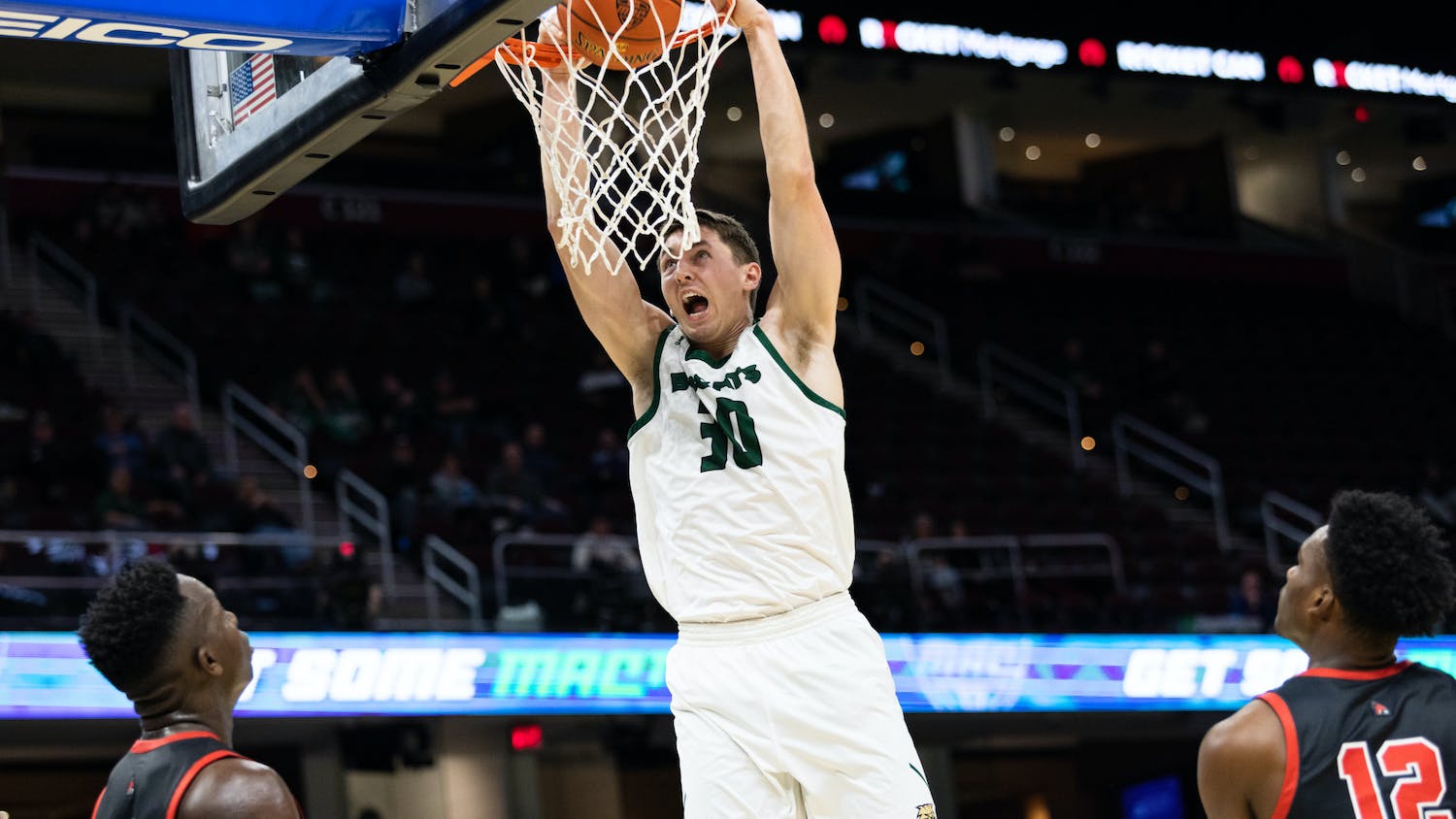 Men's Basketball: Ohio back to old self in Mid-American Conference Tournament quarterfinals win over Ball State