From an OU student, my Top 10 performances from SXSW 2015

William Hoffman gives his top performances from the 2015 SXSW music festival and conference.

SXSW is a collection of shows like no other. They are all incredibly short and frantic performances. Because there’s so much booked on one stage and turnaround has to be quick, each band is probably playing multiple shows that day and has to lug equipment across town, and you might have to leave halfway through to get in line for the next show you “must” see. I prefer being captivated for a full hour or two by one band, but the quick performances allow for a large quantity of music in a week. Nonetheless, there are some truly magical performances that come out of that week.

Here’s a quick list of my favorites from SXSW. For hardcore music fans these aren’t exactly super deep cuts like you might find at NPR or elsewhere, but for my first time there I thought I got around to a lot of well-known artists as well as finding some new great bands that weren’t on my radar before.

I already wrote a whole piece dedicated to Run The Jewels’ incredible performance at SXSW, but I don’t get tired of talking about them. The day before, I was hoping for a similar experience at an Earl Sweatshirt show, but I was met with a stagnant crowd. Earl was good, but he was not having a fun time trying to get anyone in this crowd to move. Run The Jewels had no such struggle. We immediately had our hands in the air for “We Are The Champions” and they never came down, more so because there was no room to lower my arms. It was my favorite show at SXSW and easily the best hip-hop show I’ve ever been to.

It’s easy to love Courtney Barnett. She’s just normal and her music talks about extraordinarily normal stuff: swimming in a pool, shopping for the cheap pesticide-filled fruit and how your friends don’t care if you don’t go to the party, but sometimes they actually do. Her album came out Tuesday and it’s phenomenal. You should go play it right now before reading the rest of this article. I and a ton of other dedicated, fanatical fans got a chance to hear a handful of these new songs for the first time at NPR’s showcase. It’s far harsher than the group’s former album while keeping all the same stripped-down rock that formed its fan base to begin with. The guitar noise solo (it’d be a stretch to call it a guitar solo) at the end of “Kim’s Caravan” left me breathless. It was my most anticipated show of the festival and it didn’t disappoint.

Another fantastic set from Courtney Barnett

Along with Parquet Courts, I believe Twin Peaks is reviving the slow beating heart of rock ‘n’ roll. I’m more convinced of that than ever after seeing them twice at SXSW. The band combines thrashing, head-banging guitar riffs with melodic flowing hooks for a show that can be enjoyed by moshers and far removed appreciators. This particular show was the epitome of that. A woman at least in her 50s joined the mosh pit with a red captain’s hat adorned upon her head. It didn’t stay there long. She was thrashed about in a way that made most others in the pit concerned for her safety, but every time we helped her out, she got right back up and started shoving away. She was a champ. It shows the wide appeal this band has and I hope they go on to make more amazing music in the near future.

Twin Peaks was way better the second time around. The most amazing middle aged woman moshed with us whilst wearing a captains hat. #SXSW

It was English rapper Kate Tempest’s first time in the U.S. and she was nervous as all hell. She was doing breathing exercises side stage, jumping up and down, shaking all over and then came up and just exploded onto the mic. Her sound check even blew me away as she began spitting some of the fastest poetry I’ve ever heard. It was poetry, British in root and almost Shakespearean in its delivery. I was never a big fan of the album, but seeing her live, something just clicked.

The most I knew of Laura Marling going into her performance was that she had made some great contemplative folk songs, but nothing that stuck with me. This performance was much more than that. She’s something of a virtuosic guitar player, drawing on world music, bluegrass, folk and blues. She was so calm on stage as she ripped through a slew of music from her new album out this week, switching between playing styles and genres with fluidity. I was expecting to just pop in, see a few songs and head right back out, but I was captivated the whole time.

Leaning on the railing of the balcony at Mohawk, my eyes were starting to get heavy. By that point on the first night of SXSW, we had been up for close to 24 hours, but we wanted to stick around to see Natalie Prass. It wasn’t the headliner I loved, though; it was the opener Speedy Ortiz. Despite my wavering devotion to the night I was drawn into the band’s melodic licks, much like those of Twin Peaks. A more energetic self would have wanted to be front and center to jam along to Sadie Dupuis’ smooth vocals accompanying the gruff guitar riffs, but I was content to enjoy from the back. This is a group I’m going to be paying much closer attention to after the festival.

Posters were plastered around town asking, “Who is Stromae?” Well, we found out in a big way. This French electro-pop artist is massively popular in Europe with his latest music video creeping up on 300 million views, and this crowd at SXSW is paying attention. He’d start a song I’d never heard in my life and the crowd erupted in applause. It was fun, danceable and he certainly has a passion for the theatrical. For an encore, his band carried him out and propped him up like a puppet for half the song before eventually breaking out into dance. I want to hear people start playing his music at parties; I’m tired of “Uptown Funk” and need some new jams. So add this one to your party playlist.

TV On The Radio had one of my favorite albums of last year but this live performance was wholly different from what I expected. It was loud, really freaking loud. While that made it lose some of the balance in the instrumentation I loved on the album, it was a completely different band I got to experience. They were in-your-face and energetic as they jumped around on stage. While they didn’t play one of my favorite songs, “Test Pilot,” it was still one of the most surprising, adapted live performances of the week.

There have been a lot of comparisons made between this band and Tame Impala, probably because they have a song titled in honor of the Australian psychedelic band. I haven’t seen Tame Impala live, yet, but Sunflower Bean seemed heavier and less confident. They’re young but they brought a small crowd of 20 in this 6th Street bar to its feet and impressed a whole lot of us. After just three songs they seemed surprised that they still had time left to fill, even though they were closing down the bar. They had an innocent charm about them despite the heavy riffs exploding from the amps. I can’t wait to see what this band can do with a little more experience under its belt.

I stumbled upon Hundred Waters two summers ago at the 2013 Rootwire Music & Arts Festival, back when it was still in Ohio. I instantly became hypnotized by the light show, stage presence and ambient electronics that enveloped the field. I found my emotions building and dropping with the fluidity of water, and not just because the air was filled with a thick cloud of smoke. This time around I came as a fan. Knowing the songs only made the drops all the more powerful, and they even took some creative liberties by building massive soundscapes. It was the perfect performance to close out SXSW.

Hundred Waters was an incredible way to close out #SXSW

William Hoffman is a senior studying journalism at Ohio University and digital managing editor for The Post. Look out for more pieces reflecting on the music festival and conference SXSW throughout the week. 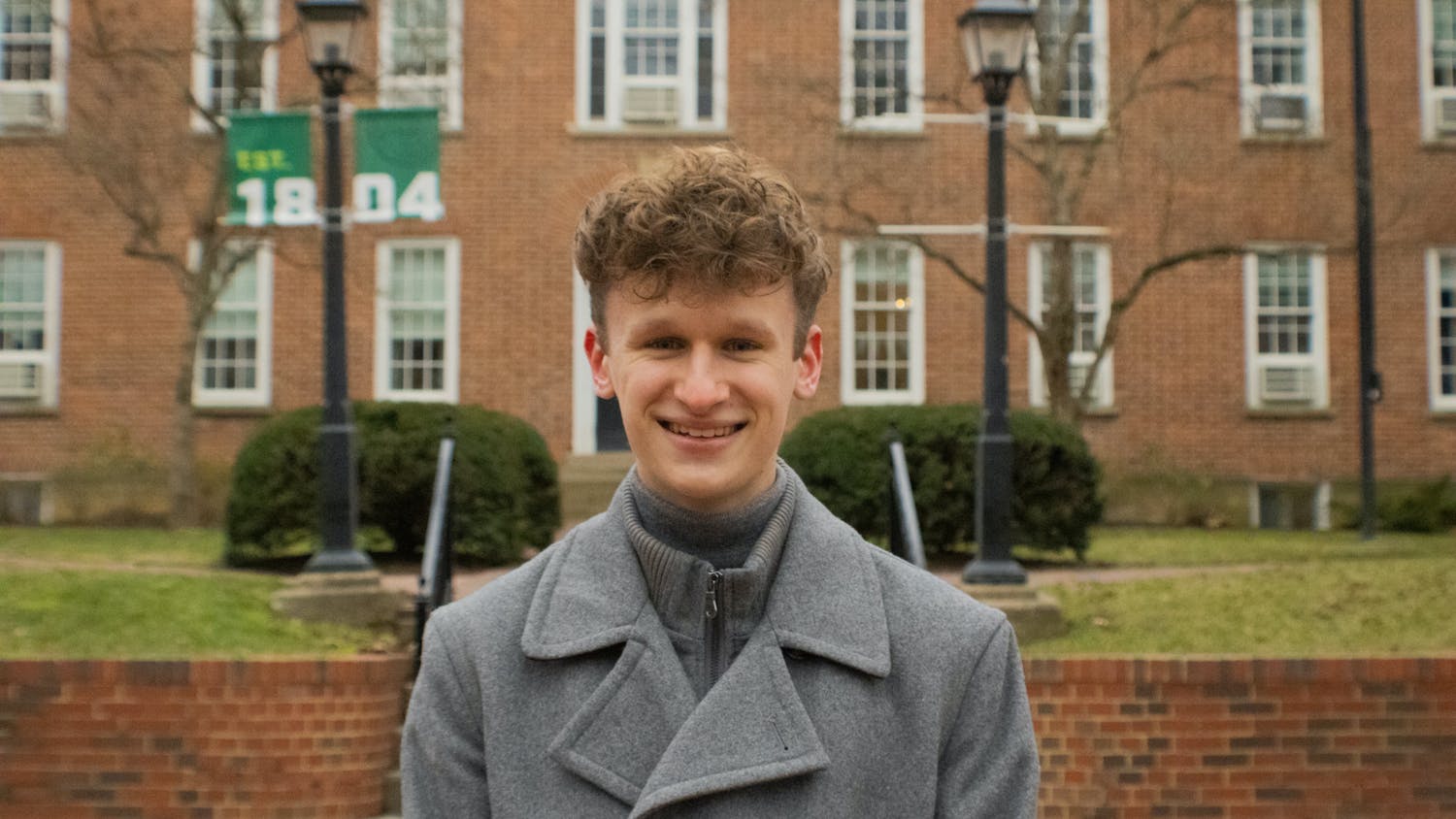