Less than three minutes into the third period Monday night, Alex Singley found the puck in the middle of a scrum and buried it into Liberty’s net, tying Ohio with Liberty.

As the Ohio players on the ice joined Singley in celebration, the bench was ecstatic. This was a huge moment in an evenly matched game. And under normal circumstances, a packed Bird Arena would be buzzing.

Instead, there were no fans in the seats to cheer on the Bobcats. Student media in the stands and parents watching from the closed-off room up above looked on as the Bobcats eventually fell to the Flames.

Ohio’s 4-2 loss Monday night was the first game played at Bird Arena since Feb. 29, 2020, when the Bobcats defeated Kent State in their final game of the 2019-20 regular season.

Less than two weeks later, the ACHA tournament was canceled due to the coronavirus pandemic, and the 2020-21 season was postponed until games were scheduled several weeks ago.

It has been especially bizarre for the Bobcats to play in front of no fans. However, this is the new normal, and it’s what the players have to deal with, senior center Kyle Craddick said.

“It was definitely weird. There’s nothing like a packed Bird (Arena), but it just comes down to us,” Craddick said. “We’re gonna have to deal with that all year and start winning some games.”

The strange feelings seeped into the coaches as well. Coach Cole Bell said it felt weird playing in a silent Bird Arena and without any fans. However, he added that it also felt good coaching a hard-fought game.

“It felt good,“ Bell said. “When you get the puck dropped, the intensity was high. It was a pretty hard fought game on both sides, and it felt good to get back behind the bench here.”

With shots on goal at 31-31 being much more even than the previous two games as well as fewer penalty minutes for the Bobcats on Monday night, their performance improved while playing at their home arena for the first time this season.

Bell also thought his team looked sharper in their first home game of the year compared to their previous two games.

“At Lindenwood, we were probably a little slow through the neutral zone and again threw the puck around too much, so they probably had it on their stick a little more often,” Bell said. “Tonight ,we were sharper, and I expect that to continue tomorrow.”

Moving forward, Ohio will have to get used to playing in front of no crowd.

Senior defenseman Shawn Baird, who was suspended for one game due to getting in a fight with a Lindenwood player last Wednesday, watched the game from the stands. He acknowledged that most games would be played on a Friday or Saturday night in front of a large crowd, and it’s up to his team to get the momentum going on their own.

“Usually on a night like this, it’s loud, and you really get that momentum,” Baird said. “You got to get yourself fired up, but it's good to just be playing hockey here.” 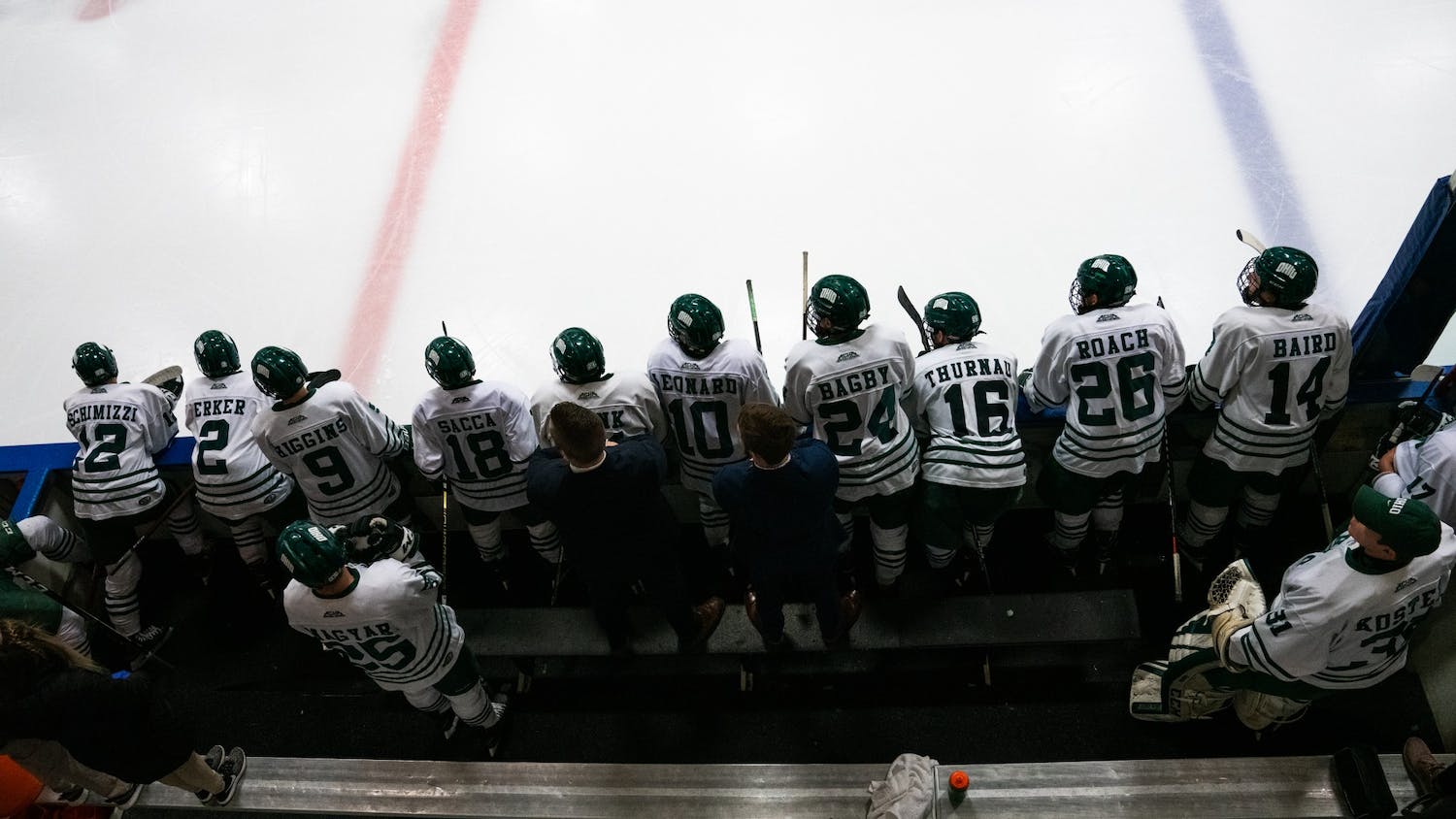 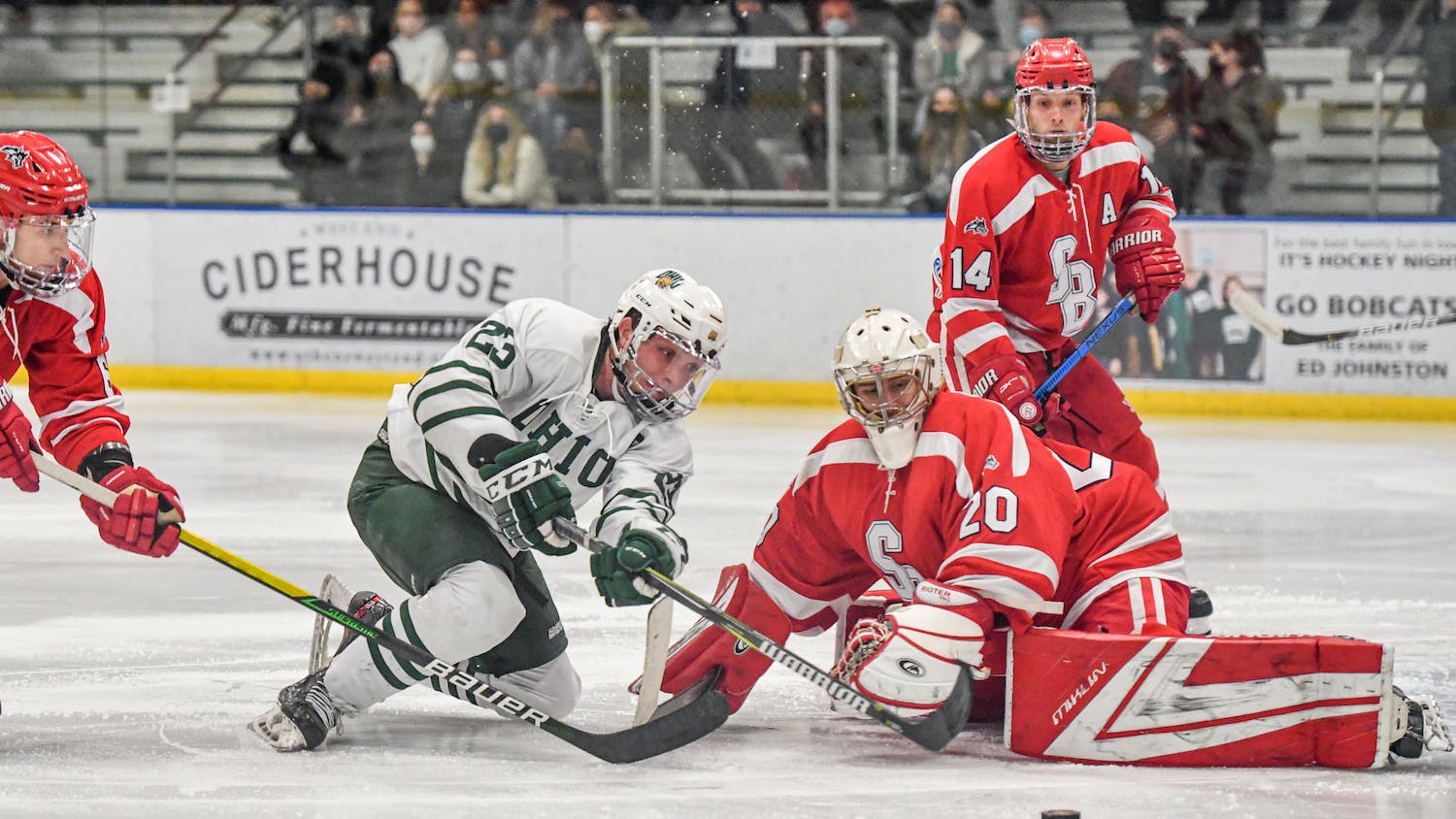