Kelsey Boeing
Ohio's CeCe Hooks (1) takes the ball coast to coast off of a steal against Miami University on Saturday, March 6, 2021 in Athens, Ohio.

That was the name that rang through the heads of the defenseless Miami players as Hooks put up the second triple-double in program history Saturday afternoon in The Convo.

The senior didn’t take the traditional route to one of the most difficult feats in basketball of double-digit points, assists and rebounds. Instead, she scored 31 points with 11 assists and 10 steals in Ohio’s 84-70 win.

There was no other way that the two-time reigning Mid-American Conference Defensive Player of the Year would do it.

“Of course it would be with steals,” coach Bob Boldon said. “How else would she do it?”

Hooks already had eight steals at the beginning of the fourth quarter. Even though the game was out of reach, Boldon didn’t want to be the one to ruin her shot at history.

“I thought, ‘Am I going to be the jackass that takes her out of the game with nine steals and six minutes left in the game?’” Boldon said. “I was not. I was going to leave her in at least until the three-minute mark.”

The first triple-double in school history came just last season when Erica Johnson hit the mark against American. This one was special for Hooks because she joined her close friend in the landmark, and Saturday was the first time Johnson had played since January.

“It was very special, especially since that’s my best friend on the team,” Hooks said. “We’ve known each other for eight-plus years. So, for us both to have it, and we came in together, is really special.”

Having Johnson back in the lineup for the first time in over a month was huge for the Bobcats (13-7, 11-6 MAC). It also allowed Hooks more space on the floor to get to the basket as she stapled her campaign to be the MAC Player of the Year.

Hooks leads the MAC in scoring this season with 26.3 points per game, and just a few weeks ago, she became the second Bobcat to score 2,000 points.

“The 2,000 points is crazy,” Boldon said. “There are so few players in the country that ever do that. And now we’re already done talking about that because she just had a triple-double with 10 steals and 30 points. It’s incredible.”

“I didn’t want to say it, but yeah, I think I deserve it,” Hooks said. “Hopefully, the Defensive Player of the Year, too.”

With the win, Ohio secured the third seed in the upcoming MAC Tournament in Cleveland. It will play against Ball State in the first round of the tournament Wednesday. The Bobcats lost to the Cardinals in overtime in January.

This tournament run serves as a bit of redemption since last year’s tournament was canceled before the semifinals.

“We were on the bus. We were there, we were ready to go and then they were like, ‘Well, you guys are going home,’” senior forward Gabby Burris said. “It was bizarre. I think we’re really ready to be back, and I know that we’re all super excited.”

The Bobcats' biggest advantage is they will have something the rest of the field won’t: Cece Hooks.

“She’s the best defensive player in the league; she’s the leading scorer in the league,” Boldon said. “To me, that’s it. It’s shut. That’s the player of the year.” 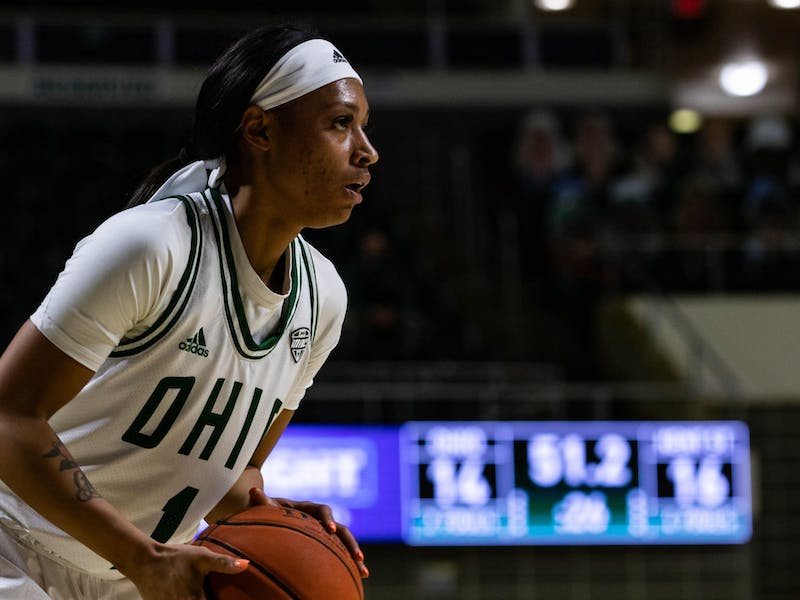