Simar Kalkat, treasurer of Ohio University Student Senate, was removed from her position in a vote of no confidence Feb. 16. Since then, Kalkat’s removal has been voided by Senate, and multiple members of the body — including former Chief Justice Hannah Fleming and former Director of Public Relations Emily Ertle — have resigned from their positions.

Since Kalkat’s removal was voided on Feb. 23, there has been increased confusion about what led to the vote of no confidence and what will happen following Senate members’ resignations. Though those events were seen in public, much has happened behind the scenes.

According to Senate’s Rules and Procedures, any student has the ability to refer any member of Senate to the Senate Judicial Panel, and the panel should consider all referrals it receives. If the panel believes the referral is without merit, it may decide to dismiss the referral.

Between October 2021 and January 2022, Kalkat was referred to the judicial panel five times for various reasons, a frequency Fleming said was very unusual. Though she was able to provide the referrals, Fleming said she could not release the identities of those who referred Kalkat.

On Oct. 26 2021,  the panel received the first referral made against Kalkat, which claimed she had posted a racist video to her Snapchat story and, in doing so, violated her oath of office. According to a timeline document compiled by Fleming, the video allegedly contained racial stereotypes about people from Mexico eating chicken and rice and Black people eating coneys and chili dogs.

Though Kalkat admits to posting the nine-second clip to her story, she denies the allegations that the video was racist. She posted the video in reference to her upbringing in Cincinnati, she said, which is known for the Skyline Chili restaurant chain.

Kalkat’s second referral referenced a disagreement she had with members of Senate’s Budget Committee about the purchase of a computer for the Senate offices. According to screenshots of a conversation among the Budget Committee members, Kalkat thought the price of the computer was too high to justify its purchase and threatened to “filibuster” Senate’s general body meeting because of it. Fleming, in her timeline document, said it was clear to her that Kalkat’s messages constituted an abuse of her power.

Kalkat said although she used the word “filibuster” in those texts, she didn’t mean for it to be taken literally. Instead, she said she wanted to voice her opinion in the general body meeting and make sure Senate money was being spent properly, which she feels is the reason she was elected.

On Dec. 2, 2021, a third referral against Kalkat was made to the panel. In an email to the panel, the person making the referral alleged Kalkat did not uphold her duties as treasurer when she failed to present a budget expenditure report during one of Senate’s general body meetings.

Though Kalkat did not present a report as the person who referred her alleged, Nathaniel Padilla, Senate’s graduate adviser who uses they/them pronouns, responded to the initial email to say they had misinformed Kalkat that she did not have to give an expenditure report update. Padilla took full responsibility for the mistake in the email.

Days later, on Dec, 11, 2021, Fleming received a fourth referral against Kalkat, which outlined a mistake Kalkat had made in writing an expenditure report. In response to the referral, Kalkat said she had wrongly categorized purchases of an HDMI cable and a USB-C cable for Senate by accident. As a result, Kalkat’s access to her discretionary funds was temporarily revoked, but after talking with her, the judicial panel returned her discretionary privileges and advised her to be more attentive to the reports she wrote.

Kalkat’s last referral came Jan. 30, when someone wrote to the judicial panel to say they felt Kalkat had abused her authority and made them feel “intimidated” during a Senate Appropriations Commission, or SAC, leadership meeting. The person who submitted the report alleged Kalkat said members should “‘be adults and handle things offline rather than utilizing the panel by reporting things,” according to the referral.

Kalkat said she was irritated with people within the SAC leadership meeting and confirmed she told members to “be adults.” However, she did not mean for it to be intimidating, she said.

In response to all of her referrals, Kalkat said she felt they were reported in an effort to get her kicked out of her position.

“The fact is I was borderline being harassed, because every time I was referred, I was guilty until I was proven innocent,” Kalkat said. “The judicial panel took action on each one of those referrals; they didn't use their own judgment on what was normal to pursue and what wasn't. They took every single referral and went with it, and if people are trying to get me out of power, obviously they're going to refer me over and over and over again to … break my morale.”

Executive Session resulting in Kalkat’s vote of no confidence

At Senate's general body meeting Feb. 16, its executive officers — President Becky “Eliza” Ivan, Vice President Elaina Tartal and Kalkat —  were evaluated in an executive session. In that session, a regularly scheduled vote on the officers’ ability to perform their jobs took place.

In a vote of no confidence, Senate’s voting members are asked if the performance and conduct of Senate’s executive members is such that they are unfit and shall be removed from office. The vote takes place in an executive session where the public and executive officers who the subject of such a vote are not permitted to be in the room. Kalkat received 11 “yea” votes and four “nay,” meaning that members who voted “yea” had no confidence in Kalkat to perform her job.

Fleming said discussions prior to an evaluation and vote of no confidence are normal procedure. As part of that discussion, Fleming read an anonymous statement from a member of Senate who did not feel comfortable sharing that information themselves, she said.

In the statement, it was alleged that Kalkat had used her Student Senate purchasing card on a $328.70 plane ticket to Austin, Texas. Kalkat reached out to Finance Customer Care through OU in January, when she initially noticed the charge, to notify the department that she had not bought the ticket.

Kalkat did not purchase the ticket, Carly Leatherwood, a university spokesperson, said. Leatherwood also said the situation was resolved in January, prior to the statement regarding the transaction being read in the executive session.

“It appears that it was an honest mistake and that the card was charged by accident,” Leatherwood said.

Following Kalkat’s initial removal, on Feb. 23, Senate held a routine student speakout before its general body meeting, which upward of 50 students attended, according to a previous Post report. At the beginning of the speakout, Ivan read from a statement, stating that Kalkat would be reinstated to her position as treasurer, nullifying her previous removal.

During the speakout, numerous students voiced frustration with Kalkat’s hasty removal the previous week, complaining about a lack of review of the anonymous tip read before the no confidence vote and Kalkat’s inability to address the allegations. Some attendees also criticized the Senate Rules and Procedures and the Senate Judicial Panel.

Questions were also raised about whether Kalkat’s racial identity may have influenced the decision for her removal. Along with claims of racial discrimination, students complained of a perceived lack of interaction between Senate and student organizations, especially those with a multicultural focus. Ivan also said a statement would be released soon after the student speakout detailing Senate’s plans to engage more with the student body and address the concerns raised at the meeting.

Near the end of the speakout and following extensive criticism of Senate, Fleming read a statement announcing her resignation and the resignations of Associate Justices Julianna Rittenberg, Julia Platt and Cheyenne Knavel, according to a previous Post report. Fleming and the others then left the room, prompting mixed responses from students.

Fleming later said she and the other judicial panel members had been considering resigning for several weeks prior to the Kalkat incident, citing frustration with Senate and consistent criticism of the judicial panel’s operations.

Several senators issued apologies for the events of the previous week, including Ivan, who addressed Kalkat during the speakout, apologizing for harm she had been caused throughout the process.

In late February, Senate released a formal apology to Kalkat on its Instagram and Twitter accounts. The statement recognized the claims brought forward were unable to be substantiated and were read while Kalkat was not present to defend herself. The statement also stated Senate would be investigating the tip read aloud in the executive session.

Senate followed suit Feb. 25, posting a statement apologizing to Kalkat for “the defamation, stress and disrespect that she has received during her term.” It also posted a tweet Monday, which rejected the claims made in the anonymous tip read prior to the vote of no confidence.

Since the meeting, Chandler Jent resigned from his position as the vice commissioner of operations for SAC on Feb. 25.  On Monday, Senate Director of Public Relations Emily Ertle also resigned.

Kalkat declined to comment on whether she intends to keep her position as treasurer.

Correction: A previous version of this article stated the wrong pronouns for Nathaniel Padilla. This article has been updated to reflect the most accurate information. 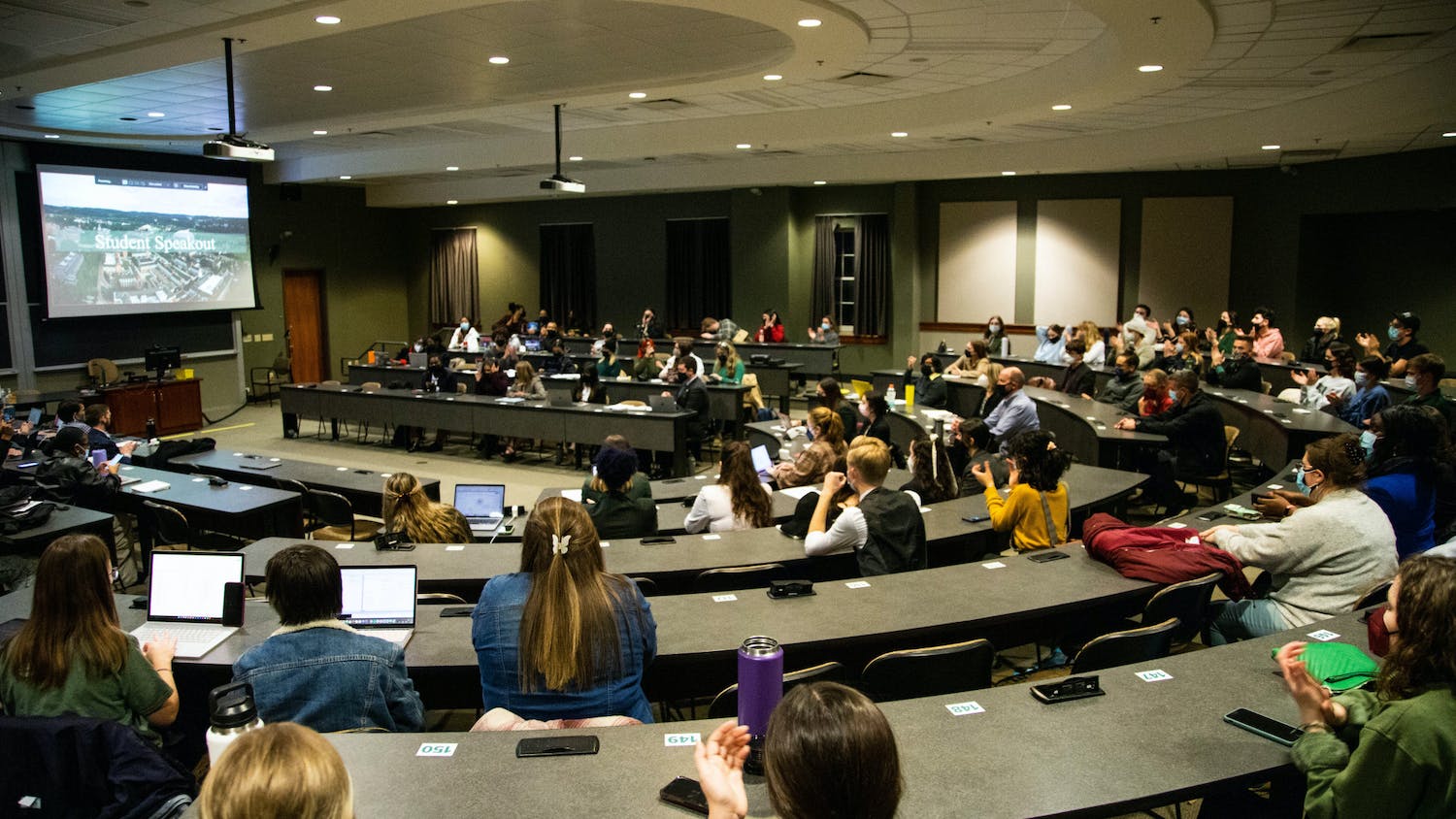 Fifth member of Student Senate resigns within a week 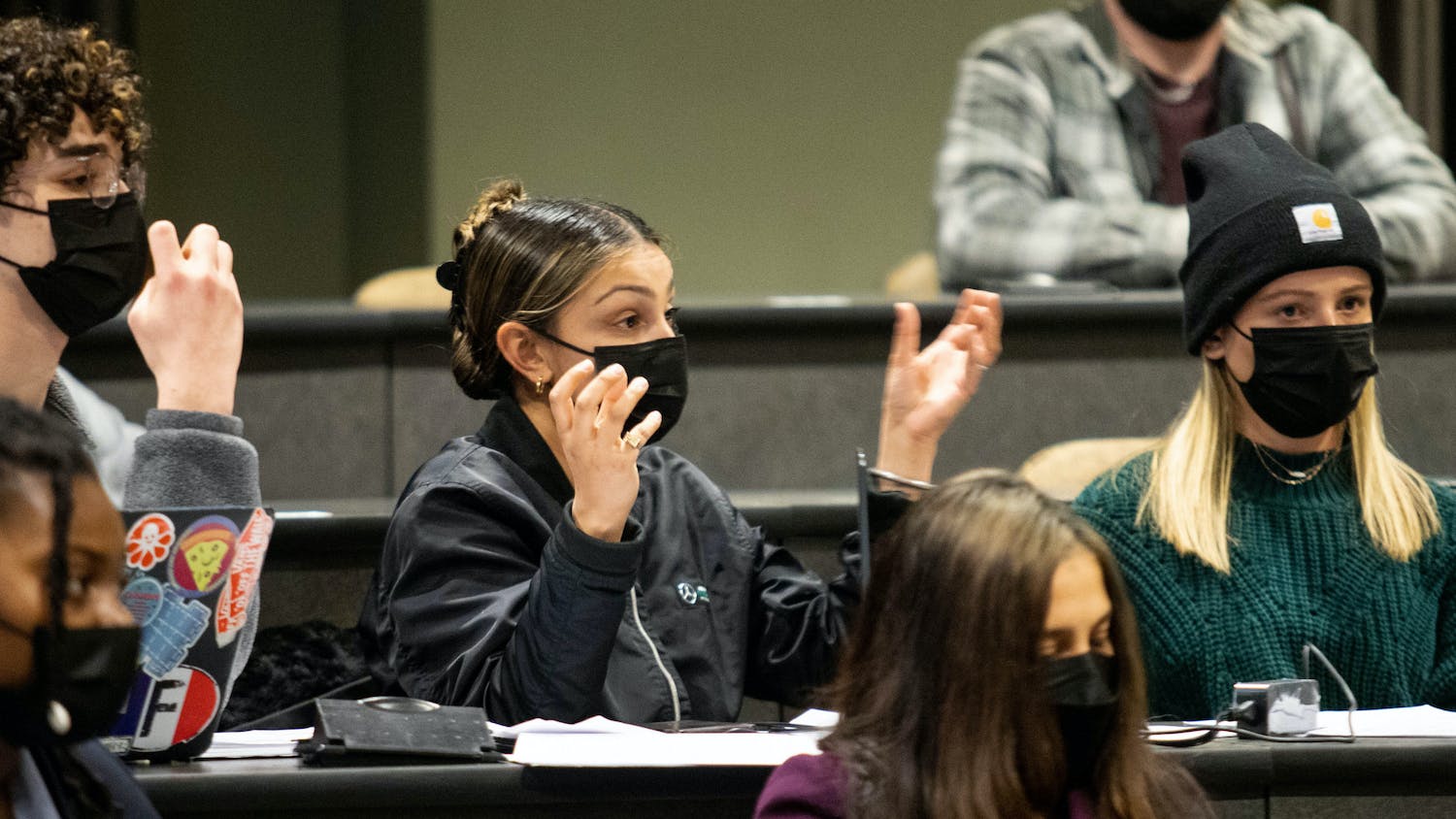