Ohio University Board of Trustees met Friday to discuss nine potential projects to update residence halls on campus and an additional project to replace the turf field at Peden Stadium.

The Resources, Facilities and Affordability Committee, or RFAC, met to discuss forecasts for Fiscal Year 2022 and project updates during the Board of Trustees meeting.

The RFAC projected the university would have a total revenue of $717.1 million and expenses would be $681.4 million, therefore FY 22 would result in a $35.7 million surplus, as was projected during the Board of Trustees meeting in January.

According to the FY 22 forecast, the university is expected to save $16.2 million in compensation expenses. This is largely due to savings related to the university’s second Voluntary Separation or Retirement Program, or VSRP, which ran from Jan. 14 to March 7, according to a previous Post report. The VSRP provides incentives for faculty to voluntarily retire or leave the university.

It is also expected that OU will save $3.2 million in COVID-19 related costs, Joe Trubacz, interim vice president for Finance and Administration, said.

The budget for FY 23 is expected to be balanced due to savings from the VSRP and an increase in enrollment.

Among the nine suggested projects were improvements to Bryan Hall, Gamertsfelder Hall, Washington Hall, Grosvenor Hall and Porter Hall. An additional project for Peden Stadium, not included in the capital projects, was also presented to the Board.

The halls would all receive various structural improvements, and the turf would be replaced in Peden Stadium.

The Board approved all nine of the proposed projects and expects to spend about $20.5 million upon their completion.

The Audit and Risk Management Committee of the Board of Trustees convened to listen to a presentation about an upcoming audit and present a recently issued audit report.

The audit plan for the coming fiscal year was presented by a representative from Crowe LLP, an independent auditing firm.

Jonathan Shultz, engagement senior manager for Crowe LLP, presented what the deliverables of the completed plan will be.

Shultz presented the timeline for the audit, which started in March and will end in October with a presentation to the audit and risk management committee.

The status of fiscal year 2022 audits were presented during the chief audit executive update.

Three audits have been completed. Two additional audits are in progress, and three have not started.

Additionally, changes to the audit and risk management committee were proposed.

One of the proposed changes was to remove the requirement that the chairperson of the committee must sign the external audit engagement letter.

There were also proposed changes to the internal audit charter, including detection of errors and irregularities, as well as support being removed as objectives of the charter. These changes were sent to the full board for approval.

In response to the recent racial hate crime at OU and Black Town Hall hosted March 28, university President Hugh Sherman invited students to share their perspectives, in lieu of a standard president’s report.

Giah Harper, a freshman studying anthropology and part of the group of students who organized the Black Town Hall, talked about the reasoning behind and goals of the town hall.

“I, like many other minority students, was outraged by the lack of support that was given from the university, and wanted real change to happen,” Harper said. “I’m a freshman here. I just wanted my three years to be filled with safety and support, and I wanted to be respected on the campus I love.”

Other students, including Jhasmin Glass, a freshman studying management, shared their personal experiences as well as their perspective of the administration's treatment of minority organizations on campus.

“Upon getting involved with a multitude of organizations here I was really disappointed to see a clear lack of support from the administration,” Glass said. “While there are many multicultural orgs on campus, it felt as if they were simply tolerated and allowed to exist rather than given the full support to create a community of safety.”

Sherman also presented the six initial action steps OU will be taking to move towards a more inclusive community that were announced April 1 and include:

“I think one of the most powerful things we can do is bring in a national expert,” Sherman said. “That should be done this summer and help us to have a discussion about additional steps we can take.”

Members of the Graduate Employee Organization, or GEO, and others staged a demonstration outside the entrance to Walter Hall while the Board of Trustees meeting occurred to protest unfair wages and inadequate healthcare for graduate students employed by the university.

Around 20 people gathered with banners and signs, chanting for better provisions from the university. Many shared personal stories of struggles and experiences with low pay and insufficient health care with the group.

Representatives from GEO spoke inside with Board Secretary Dave Moore about their concerns during the protest. One member of GEO, Courtney Silver-Peavey, reported to the crowd Moore said he would share a letter she wrote to the chair of the Board with the rest of its members. He also allegedly said he would share a GEO petition to improve working conditions for graduate students who teach.

GEO will present at the June Board meeting, Silver-Peavey said. 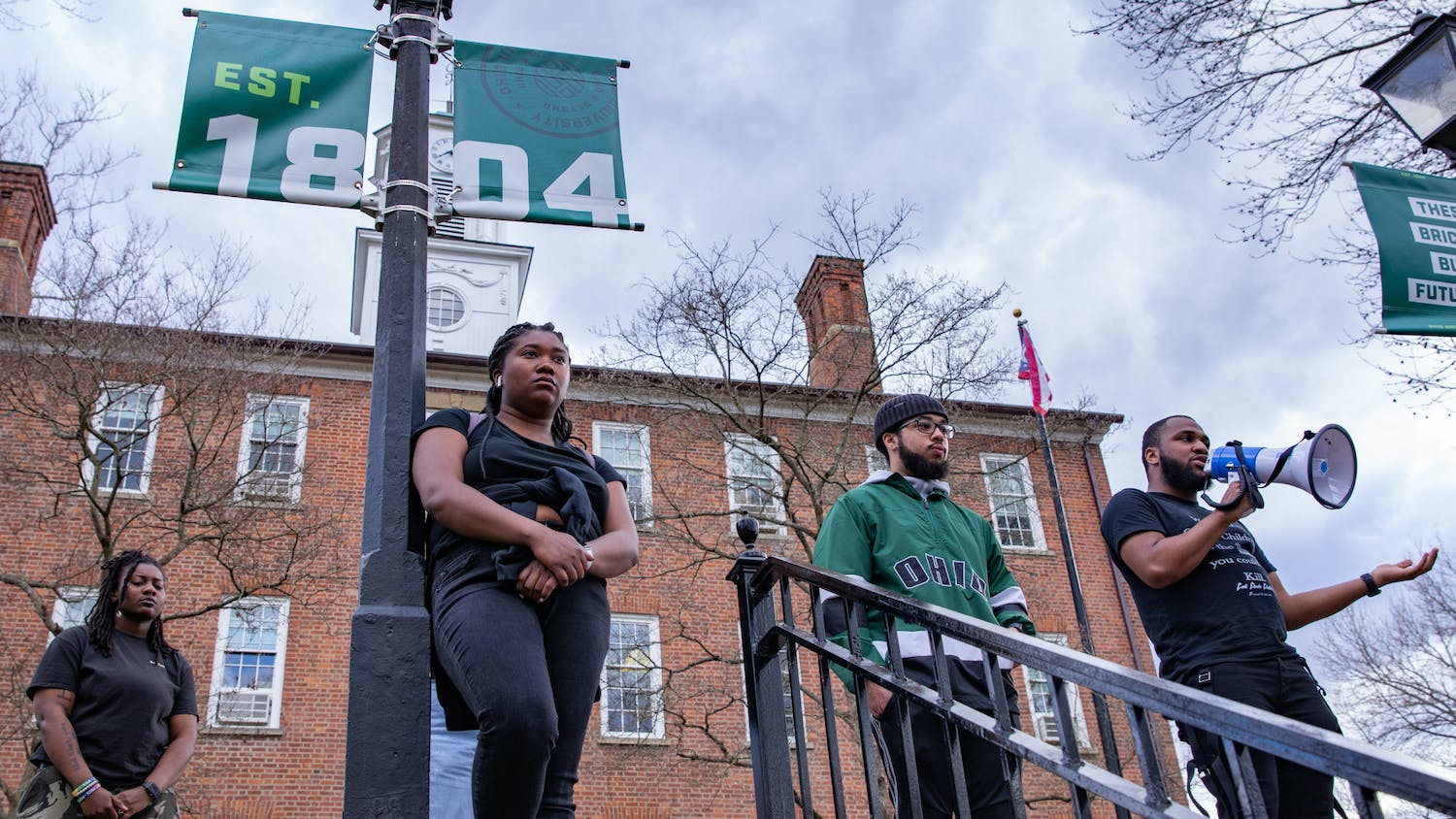