The second episode in the new season of The Walking Dead answers questions and shocks the audience.

With the first episode in the new series ending with a HUGE bang, I didn’t think it could any more shocking.

This may have been one of my favorite Walking Dead episodes to ever grace my TV screen. And I’ve seen them all...multiple times.

But first, props to the makeup crew. And shout-out to director Greg Nicotero for his keen eye on the zombie and injury makeup. If I hadn’t been sitting on my futon, I swear I could’ve been standing in Alexandria watching all of this unfold. But seriously, this is the best season for makeup so far. Usually when a series gets to season 6, viewers get lazy and uninterested. But the makeup and special effects have kept the viewership going steady.

Here are some questions I have going into episode two:

What’s that loud horn, and where is coming from?

What are they going to do about the zombies?

And where are the Wolves?

But, luckily for us (so far) this season, there has not been any traumatic deaths. But it’s bound to happen, and I have my “Don’t open, dead inside” pillow for support.

I knew from the start of the series that I liked Carl’s (Chandler Riggs) love interest, Enid (Katelyn Nacon). She’s obviously someone who has seen some bad stuff in her days, and fits in more with the likes of Rick’s (Andrew Lincoln) group than the people of Alexandria. Plus, she’s a younger character that adds depth to the plot. I like her.

And this episode “JSS," we found out what she’s done.

The episode starts off with her and her parents trying to start a car. A horde of zombies start to come from all directions, and the scene quickly shifts to a bloody Enid in the car. We see the zombies feeding on a body outside, who we can only assume to be one of her parents. Enid traces “JSS” on the foggy window, and ends with her completely devastated in the car. Woah.

We then follow Enid along a dusty road, where a turtle is slowly crossing the path. The hungry, desperate girl rips the head off the turtle and eats the flesh in a barbaric rage. The first few minutes of this episode alone showed some of the most emotional scenes the series has seen since the days of Lori. Being alone and young in this post apocalyptic is something we have yet to see, and this scene showed it all. Enid, bloody-faced and dirty, leaves the episode with bones on the road. She then makes it to Alexandria, and the scene cuts there. This whole beginning had me like:

I’m a sucker for a good backstory, and this is one of my top 15. Even though she is a minor character, I want to give thanks to the writer who came up with this one.

Back in present time, we see Carol (Melissa McBride) and a few of the old Alexandria hens in the town’s pantry. Crafty Carol — as I like to call her — is telling some of the ladies how they can better use their resources. While looking at noodles, this one lady, Shelley, complains about not having a pasta machine. A PASTA MACHINE. Like, lady, this isn’t Sicily. Our pre-apocalyptic lazy American butts don’t have pasta machines. When Carol offers to teach her how to make it, Shelley replies with a spiteful remark. Sassy, crafty Carol immediately throws back some shade, and tells the lady she should quit smoking, because it’s a nasty habit. Man, how I love old housewife drama.

We then see Carol talking to Sam (Major Dodson), and see her post-prison badass come out. She yells at Sam and tells him to get over his abusive father’s death. You go girl.

Next there is Jessie (Alexandra Breckenridge) and Ron Anderson (the abusive father/husband’s family) only two episodes after his death. She is trying to talk to him, and like a typical angry-at-the-world teenager, he won’t talk to her. Ron (Austin Abrams) asks if she’s friends with Rick (who killed his father) and she says yes. Good. Add more fuel to the fire. Father Gabriel (Seth Gilliam), FINALLY realizing what needs to be done, asks Carl for some help learning how to kill walkers, and he agrees.

Some other neighborhood events and drama ensue, and as viewers we think everything seems to be just dandy. But don’t think that so soon…

Carol is putting a casserole in the oven, and setting a timer for 45 minutes — remember that time. She relaxes and looks out her window and spots Shelley smoking a cigarette. Not moments later, a man in dirty clothes runs up, AND SLICES SHELLEY OPEN. RIGHT OPEN.

And this is where the madness starts…

Maggie (Lauren Cohan) and Deanna (Tovah Feldshuh) are walking when they see Richard, a resident on watch, get MESSED up by a molotov cocktail. He is bloody and burning and is going to be dead soon. Crazy people start climbing the walls, who we soon find out to be the Wolves, and get into the seemingly impenetrable Alexandria.

Carol, who we already know is our savior from the escape at Terminus, tells Carl to stay inside and keep Judith safe. Naturally, he has a semi-automatic military grade rifle to guard the house, in true Walking Dead style.

Jessie and Sam hear someone break in, and hide in a closet upstairs.

Enid comes to say goodbye to Carl (NO!) and he convinces her to stay and help guard Judith. All this time I’m like:

We see Carol watching Shelley get murdered. One of the crazy wolves disembowels her and paints a “W” on his forehead in blood. Carol stabs the woman in the head so she won’t turn. And this is when I knew the master of disguise was about to enter beast mode.

But, the scene cuts to Spencer (Austin Nichols), Deanna’s son, in the lookout tower trying to shoot Wolves. He suddenly sees a semi HURDLING toward the gate and shoots the window in hopes of killing the driver. When he does, the semi hurdles into the wall and a loud horn resonates through Alexandria. We finally know where it was coming from in the premiere. So not only is a whole army of walkers coming toward the town, but the Wolves are destroying it too. AWESOME. Spencer gets loose and tries to turn off the horn, but a walker is in the way. Just in time, Morgan (Lennie James) comes and kills the walker and turns off the horn.

Back inside the walls, Morgan sees a wolf and tells him to leave. When he doesn’t, Morgan knocks him out with his staff. Just as he is about to go, a wolf swoops in and stabs the unconscious guy in the head. When they pull their mask down, we see it is Carol. She paints a “W” on her head in blood, and tells Morgan they have to kill people and go on their merrily way. I LOST IT. I was so shocked and happy badass that Carol is back that all I could do is laugh.

At the same time, Ron is being chased by a Wolf. I was hoping the little brat would die, and just as he was about to get stabbed, Carl came to the rescue and shot the guy in the leg. After a short altercation ending in the guy’s death, Carl offers Ron protection. Instead, he runs away back into the madness.

The next scene jumps to Jessie’s house as a door is opened. Thinking it is Ron, she runs downstairs to greet him. We see instead that it is a Wolf woman, and a fight to the death breaks out. After the Wolf woman almost gets Jessie’s gun, she grabs a pair of shears and stabs the lady to death. And I must say, it was extremely violent. Ron walks in as she is Lizzie Borden-ing her (40 plus stabs I swear). And (hopefully) this is when Ron learns to stop being a brat.

More EXTREMELY VIOLENT blood shed and murders continue. I’m no sadist, but all the while I’m sitting there like:

The final battle scene with the Wolves involves Morgan surrounded by a group of them, with only his staff. We already know he is SUPER agile with it, but even I was worried with the amount of people that were surrounding him. He wrecks some of them, and orders the Wolves to run away. He closes the gate behind them, and the massacre is over.

The camera then pans to Aaron (Ross Marquand), as he finds the backpack with the pictures of Alexandria he took when originally recruiting Rick’s group. The backpack was with a Wolf, and that’s how we know the camp was found.

Carl is then shown in his house with a farewell letter from Edid by the back door saying “Just survive somehow,” which ends up having the initials “JSS,” the title and theme of the episode. 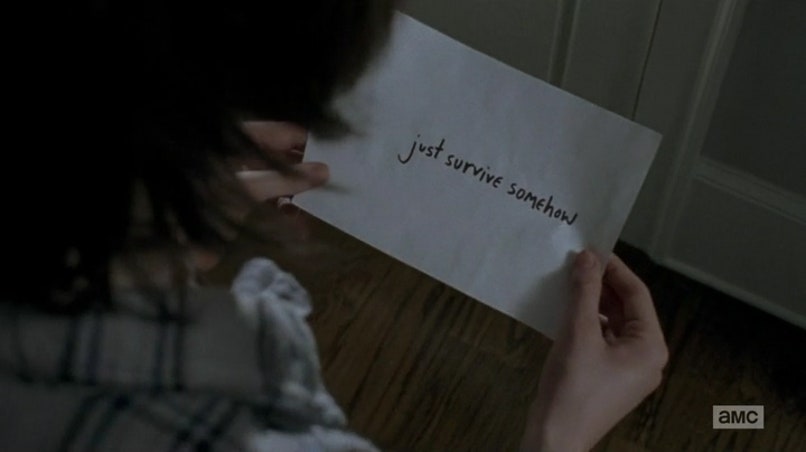 And for the final scene, Carl is in the house, and the timer for the casserole goes off. All of this happened in only 45 minutes.

This season is already sending me on a rollercoaster of emotions, and I can’t wait to see what The Walking Dead brings next week.

The Walking Dead airs every Sunday at 9 p.m., on AMC