Professor Judith Curry from Georgia Tech explains her skeptical position on climate change to a public audience in the Walter Hall rotunda room. She is known by her colleagues as the "climate heretic".

Judith A. Curry, an outspoken skeptic of climate change, asserted herself as a ‘climate heretic’ during her presentation on climate change Monday night in Walter Hall Rotunda.

“It’s a name I’m proud to bear,” said Curry, a professor of Earth and Atmospheric Sciences at Georgia Institute of Technology. “I’m not telling anybody what to do; it’s the honest broker role.”

Curry came to OU as part of the George Washington Forum, a group that brings several speakers to campus each year to offer a diversity of opinions in Athens. The forum was created by Robert Ingram, associate professor of History, in 2009.

Past notable speakers have included John Bolton, former U.S. ambassador to the United Nations, and Roger Ailes, the CEO of Fox News and an OU alum.

Curry’s climate debate presentation gathered a large crowd of environmentally-conscious Ohio University students and faculty, as well as some Athens residents with a personal interest in the nation's current environmental agenda.

An Athens resident for nearly 50 years, Whealey has followed the impacts of the southeastern Ohio coal industry. Being exposed to the direct environmental effects of small-stack power plants, like acid mine drainage and mountaintop removal, Whealey can’t help but worry about the legacy of coal in the United States.

“That is not an ivory tower issue,” Whealey said in response to Curry’s statement categorizing some scientists as isolated in their climate policies. “Not for the people who live in those states.”

“People are interested in what I have to say,” Curry said. “I publish papers between science and policy. Does that make me an expert? I don’t know.”

But she didn’t provide the audience with a list of alternative solutions.

“I don’t have any solutions,” Curry said. “We’ve oversimplified both the problem and the solution. I’m trying to frame the problem in a different way.”

One of the areas Curry specifically targeted as lacking in concrete, science-based evidence is the assertion from the Intergovernmental Panel on Climate Change that attributes global temperature risings to human-induced activities, at an increasing high likelihood.

Ryan Fogt, associate professor of Meteorology at OU, disagreed with Curry’s claim that climate is all one “wicked mess.”

“I do applaud her efforts for trying to instill faith in the climate sciences,” Fogt said. “But I got this sense from her talk that we don’t know anything, and that we can’t say anything, that we can’t make any kind of claims about causality, at least dominant.”

Curry argued that current climate models are unsustainable and cannot accurately account for natural variances in the environment, like ocean heat oscillations and volcanic eruptions, as well as unforeseen surprises.

“That’s against consensus,” Fogt said. “I think we do know quite a bit of things, and we can still see an important link between greenhouse emissions and warming. We can separate that out even from natural variations, even if the models are too sensitive to that warming.”

Despite Curry’s ambiguous statement that “there’s a lot we just don’t know,” several students were in attendance to gain advice on areas of future study, in order to help solidify the science behind the global climate issue.

“We can’t just resign ourselves in saying it’s a big mess,” said Sara Sand, a sophomore studying engineering physics. “And not saying where do we want to go from here, what research needs to be done.”

Sand, reflecting on her own research aspirations, said she wanted to hear from a current climatologist on how current undergraduate students can prepare for an uncertain global climate in their respective fields of study.

“My research that I want to do now is on alternative energy,” Sand said. “There’s still uncertainty in the climatology, but we still kinda know it’s headed in a bad direction. I was looking for a specific set of (research topics). What can we do.”

“There are some scientists staying in the ivory tower,” Curry said. “I’ve decided to engage with the public.” 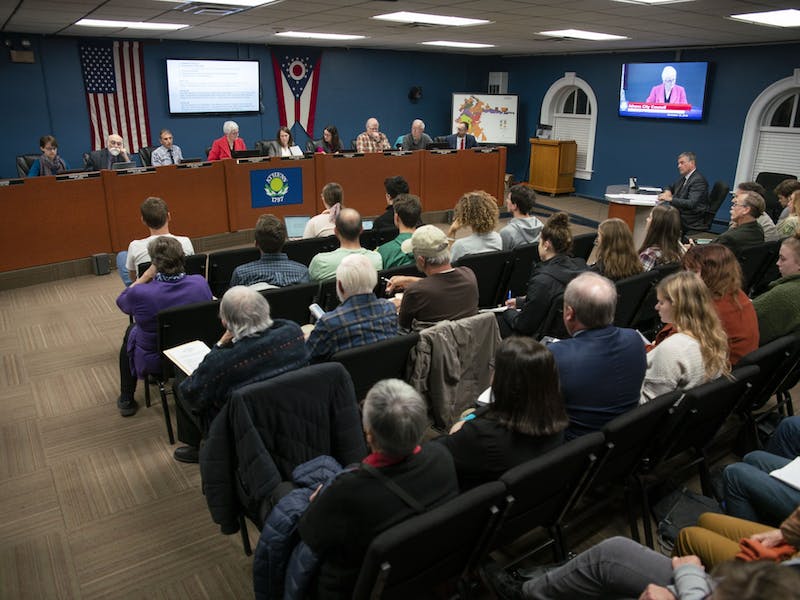 EXCLUSIVE: Duane Nellis speaks on his decision to step down as OU president